Today I’m up to my ears in basement. We have a professional organizer turning a heavily packed and useless living space into a downstairs office and play area for us! (This will come in handy in the summertime!) Special bonus — got part of the garage cleared out, too!

As divine Providence would have it, Sarah Reinhard posted a lovely reflection today at CE on waiting with her suffering child in the emergency room, on her helplessness to relieve little Babb’s suffering … and her realization that the Blessed Mother could especially relate to her suffering, from her own experiences during the final week in the life of Christ. 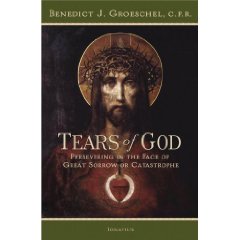 Today at ZENIT, Father Benedict Groeschel talks about his new book “The Tears of God” in this homily for the Legionares of Christ. I think it has relevance to all of us. Here is an excerpt from the homily…

If you look at the religions of the world, there are unique qualities about each of them, that were founded by sincere people, far away from Christianity, and perhaps with the inspiration of the Holy Spirit in those cultures: Buddhism, for instance. And in those religions, God never suffers. In the Jewish religion, from which we come, God gets mad. He gets annoyed. He also gets happy; he rejoices when things are going well. But in Christianity, God suffers. An incredible, impossible thought. The absolute, infinite, divine being, eternal, unchangeable… That he could weep: This is the mystery of the Incarnation. Christ comes and weeps with us. He suffers with us. We have the unthinkable reality of a God who dies. Incomprehensible. Theologically, we have explanations through the Councils of how it could happen, but it’s a mystery of mysteries. And the devotions of the centuries, especially of the Sacred Heart, reveal that Christ in a mysterious way suffers with us today.

Pope John Paul quoted the French writer Léon Bloy that “Christ is on his cross till the end of the world in his Mystical Body.” And so Christ suffers with you in a very special way.

Years from now, you’ll think back on these difficult days, and I hope you’ll remember that Christ suffered with you. Let the cross be your guide. St. Augustine says, “When the cross was first preached to the few who believed, it was mocked by the multitudes. But by the power of the cross, the blind saw, the lame walked, the lepers were cleansed, and even the dead rose so that even among the powers of this world, men would come to believe that there is, in fact, nothing more powerful than the humility of God.” Nothing more powerful than the humility of God.