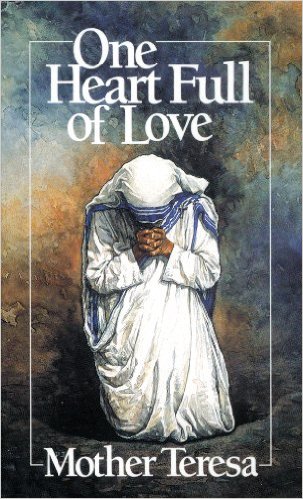 In celebration of the canonization of Saint Teresa of Calcutta (Mother Teresa) on September 4, I would like to share with you eight lessons and prayers that I discovered from reading Mother Teresa’s writings. Feel free to share some of your favorites as well!

Lesson #1  The Power of Loving the “Other”.  I first discovered the writings of St. Teresa of Calcutta riding at the back of a cross-country bus in Mexico. A recent Bible school graduate, I had been presented with two options: Spend a year in Singapore, helping to start up a new Bible school for local pastors-in-training, or going back to school and becoming a book editor. I decided to take a few weeks to visit missionary friends, traveling by bus from Acapulco to northeastern Mexico. The adventure gave me plenty of time to think.

My backpack contained only a few essentials: a few apples, a roll of TP, a change of clothes and toiletries, my Bible and journal, and two books that had been recommended to me — Elisabeth Elliot’s autobiographical These Strange Ashes, and Mother Teresa’s, One Heart Full of Love. Early in the book, Mother Teresa recounts a story of going to help a local Hindu family with eight children who had not eaten for days. She writes:

“I could see the specter of hunger drawn on the faces of the little children when we found the family. . . In spite of their need, the mother had the courage and compassion to divide the rice that I had brought into two portions. Then she went out… It seems a Moslem family with the same number of children lived across the street. She knew they were hungry, too.”[1]

Her act of no-strings-attached generosity surprised me. I had been taught that “real” missionaries always focus on spiritual needs. And yet, nowhere in the text did it appear that Mother Teresa had prayed with the family as she handed over the food. What was more, she had clearly seen in that Hindu mother something. . . virtuous. What did it mean? Could one truly share the love of God in such a simple way, without expectation that the gesture would lead to a Bible study? This was an uncomfortable thought planted in my evangelical brain.

Mother Teresa’s “ecumenical mindset” flew in the face of my missionary training, which had elevated “church planting” over any other kind of service. I had not yet discovered the corporal and spiritual acts of mercy as such, or set foot in a Catholic Mass. And yet the words and actions of this dear “saint of the slums” resonated in me, and reminded me of the words of the Lord in which he separates the sheep (which up to that point I thought meant “Bible-believing Christians”) and goats (“everyone else”). And yet the example of Mother Teresa (a Catholic!), made me look again:

When the Son of Man comes in his glory, and all the angels with him, then he will sit on the throne of his glory. All the nations will be gathered before him, and he will separate people one from another as a shepherd separates the sheep from the goats, and he will put the sheep at his right hand and the goats at the left. Then the king will say to those at his right hand, ‘Come, you that are blessed by my Father, inherit the kingdom prepared for you from the foundation of the world; for I was hungry and you gave me food, I was thirsty and you gave me something to drink, I was a stranger and you welcomed me, 36 I was naked and you gave me clothing, I was sick and you took care of me, I was in prison and you visited me.’

Gulp. Reading further in the book about Mother Teresa, I saw that even as she tended souls as they passed into the presence of God, she did not force them to say the “sinner’s prayer.” Rather, she urged them to face God without the weight of unforgiveness and regret upon their souls, to find peace before they died. Her heart of Mother Teresa was first and foremost . . . a mother’s.

Although I had been a Christian all my life, poring over that book on a bumpy Mexican bus I saw something that challenged my most treasured presuppositions about God’s love, seeing its simplest and purest form in the life of a Catholic nun – the last place I ever expected to find it. This was the first lesson I learned from Mother Teresa . . . but it would not be the last. As I worked, I took away seven more important lessons from the life and writings of this great lady, which we will examine more closely in the coming days. I’ve written eight daily posts, to take us from the canonization of Mother Teresa to the fifteenth anniversary of the September 11 attacks.

Lesson #2: Take Mary with You.

Lesson #3: God Works Miracles When We Make Ourselves Small.

Lesson#7: God measures “success” differently than we do.